My friend Shane Deichman had an important post at Wizards of Oz - a review of Dr. John Kao's new book, Innovation Nation (Kao's site is here). I have not read the book yet but Shane's review of Kao's work struck a chord with my interest in educational reform. We are living in a transformative era but our educational system's paradigm, structures and methodologies are looking dangerously anachronistic. Shane writes, in part:

"He is also a man with a true “long view” – a vision not just for our immediate future, but for this and the next century. In Innovation Nation, Kao describes the evolution of “innovation models” – from individual achievement to today’s “version 4.0” that rapidly adapts best practices across a globally diffuse environment of open architectures and collaboration. America is the “incumbent”, but also seemingly blind to the challenges posed by emergent innovation powers like Singapore, Denmark and Finland.

The book continues with an honest critique of America’s education system, comparing and contrasting our response (in terms of funding, curriculum development, teacher training, school construction, etc.) to Sputnik and President Kennedy’s famous challenge at Rice University in 1962 to today’s sagging U.S. aptitude test scores and lackluster performance in math and science. John compares the high barriers to entry (both literally and figuratively) of our nation’s immigration system to that in global innovation hot spots, along with the perils they bring."

What can be done to ramp up American creativity and innovation ? Many things, most of which are outside the scope of this post, but Kao hones in on addressing the fundamentals, which includes our educational system and also our culture ( or rather, our institutional cultures). Together they compose a social platform that will either inhibit or accelerate the rate of innovation in America. 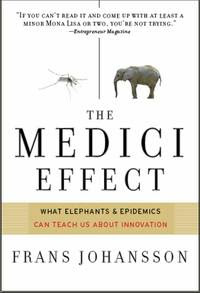 Looking at the cognition of creative thinking and innovation.

Two books that might help in re-engineering the culture in the direction that Kao envisions are that of fellow Harvard professor Howard Gardner's Five Minds For the Future and also The Medici Effect by strategic consultant Frans Johansson. While both authors explore individual thinking and the mentalities of organizations, Gardner, a popular guru in the field of educational psychology, emphasizes the former.

Gardner's book explores five "minds" or cognitive approaches that he believes will be important for the 21st century. They are:

"The Disciplinary Mind: the mastery of
major schools of thought, including
science, mathematics, and history, and of
at least one professional craft.

The Synthesizing Mind: the ability to
integrate ideas from different disciplines
or spheres into a coherent whole and to
communicate that integration to others.

The Creating Mind: the capacity to
uncover and clarify new problems,
questions and phenomena.

The Respectful Mind: awareness of and
appreciation for differences among
human beings and human groups.

The Ethical Mind: fulfillment of one's
responsibilities as a worker and as a
citizen."

While the last two are outside of this discussion, the disciplinary mind has been discussed here many times under the auspices of the term "vertical thinking" and Gardner does an excellent job on explaining how that kind of training for subject mastery creates a base for the development or refinement of other kinds of thinking.

Having the disciplinary mind of a vertical thinking expert is particularly complementary to the practice of horizontal thinking, though many experts resist horizontal thinking out of habitual analytical reductionism, the legacy of academic culture or ego, fearing to be seen operating outside one's area of known competence. Gardner likes to make the analogy of an intellectual laser vs. a searchlight in comparing the two.

Gardner, under the influence of Mihalyi Csikszentmihalyi, divides the cognitive activities of horizontal thinking, into the Synthesizing Mind and the Creative Mind, which would be drawn upon during the process of innovation. Like Csikzentmihalyi, Gardner's definition of creativity is product-oriented and scalar - the results of creative thinking must approach a certain, tangible, magnitude of effect to count - "Big C" creativity, in Gardner's words.

I've never agreed with that distinction. First, it discounts the effect of stochastic tinkering, which are simply creative tweaks on the micro scale that can be very significant, especially when collectively harnessed on a wikinomic/mass collaboration platform. Secondly, the small scale creativity is a necessary developmental step to take, cognitively speaking, before running with grand accomplishments later in life. Even geniuses and polymaths like Isaac Newton and Mozart who demonstrated tremendous creative breakthroughs of a global impact at a relatively young age, went through periods of early, if precocious, experimentation.

Gardner's chapter on synthesis is worth the price of the book alone as he gives it a thorough summative treatment, detailing eight kinds of synthesis that have four components and three kinds of motivations. John Boyd wrote of the process of synthesis as a "dialectical engine"; if so, Gardner would consider metaphors to be the spark plugs of integration and innovation, a valuble tool that helps connect a brain with a "massive modularity" in physiological structure. Gardner considers accomplishment of true interdisciplinarity to be hard but acquisition of "multiperspectivalism" among practitioners to be a realistic goal for synthesis.

Creative Minds, in Gradner's view, are interactive, working within a " social field" that validates their accomplishments but are not confined to the boundaries of a disciplinary field that inhibits most practitioners from discovery or innovation. He is very cautious of " false creativity" or precipitous claims of "creativity" from those jacks-of-all-trades who have yet to master a single domain. Writing on American public schools in the 1980's, Gardner states:

"In schools (and in after school sites) the compelling need was for the achievment of genuine mastery of a recognized discipline: not only was there no need for educators to wave the flag of creativity; it might have been counterproductive to do so. Only through the honing of discipline would genuinely creative options emerge." (Gardner, 85)

Gardner's books are often of an uneven quality of depth. His chapter on the Creative Mind is not nearly as thorough as the one on the Synthesizing Mind ( not surprising as Gardner has not laid out a convincing case, in my view, why the two ought to have been separated in the first place; moreso, by his section on their interrelationship). He does give more practical examples from the corporate world and discuss the potential of online platforms for creativity in terms of a Wikipedia -Britannica continuum.

Innovation depends upon the ability to generate new insights and bring these to practical fruition. Cognitively, our tools would include metaphors, analogies, visualization, consciously systematic lateral thinking in the syle of Edward DeBono and harnessing the powers of intuition and imagination in a conceptually-rich intellectual environment.